Hispanic edition of The Why? Behind The Buy™ finds these shoppers are embracing new products and technology 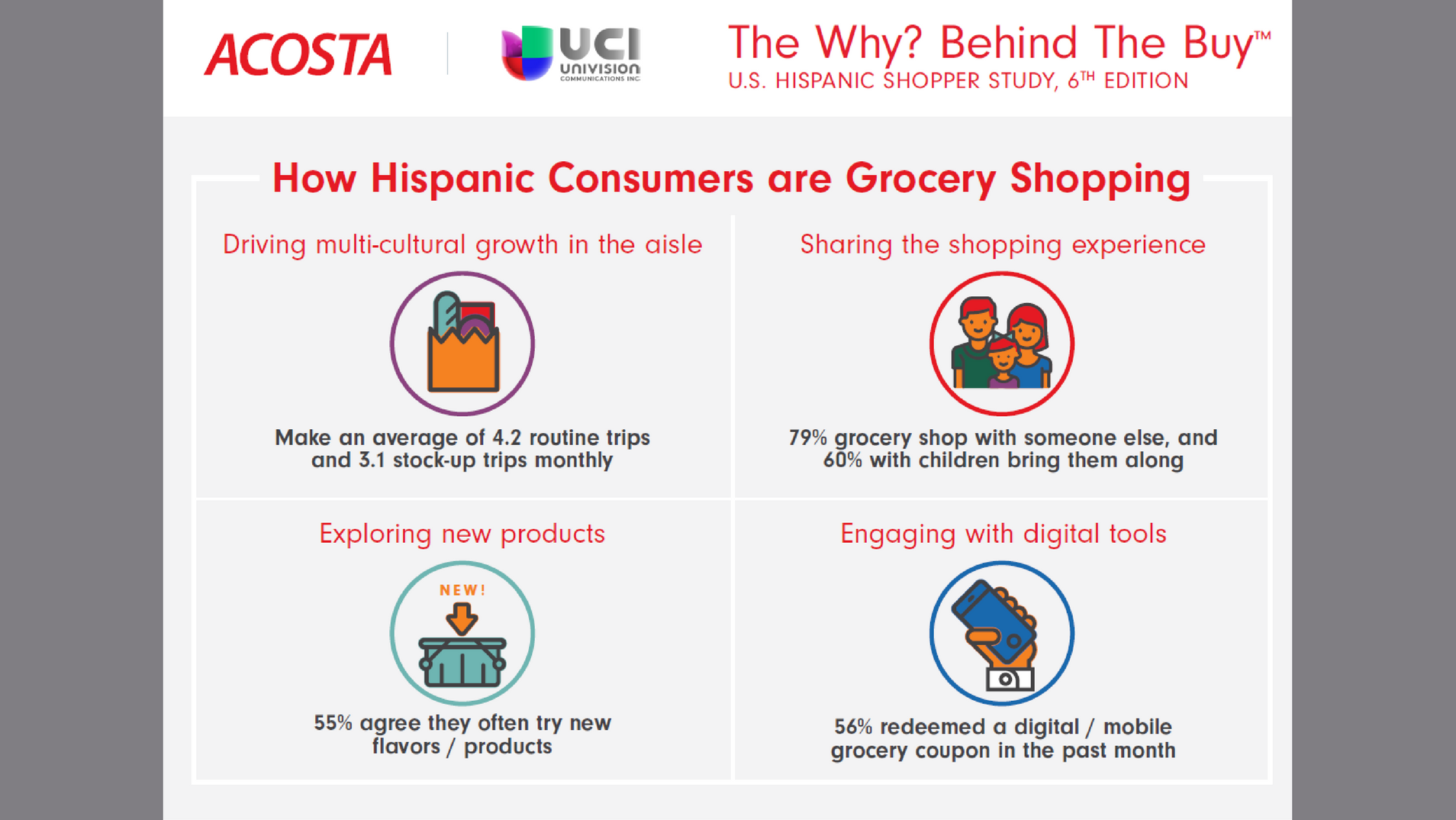 Jacksonville, Fla. and New York, (Dec. 12, 2017) — Hispanic shoppers are more profitable than total U.S. shoppers, and although their spending per trip is comparable, Hispanics actually shop more frequently across all grocery trip types. Additionally, Hispanic shoppers with kids spend over $50 more per month total U.S. shoppers, according to the 6th Edition of The Why? Behind The Buy™ U.S. Hispanic Shopper Study, an annual report released by Acosta, a leading full-service sales and marketing agency in the consumer packaged goods (CPG) industry, and Univision Communications Inc. (UCI), the leading media company serving Hispanic America. In this latest insights report exploring the buying patterns and behaviors of Hispanic shoppers in the U.S., Acosta and UCI found 72 percent of this demographic enjoys grocery shopping, compared to 61 percent of total U.S. shoppers — a difference that has widened by two percentage points compared to the year prior.

“The Why? Behind The Buy™ U.S. Hispanic Shopper Studies have continued to show that Hispanic shoppers bring family members to the grocery store, and often, their companions are their children,” said Marianne Quinlan-Sacksteder, Director of Insights, Acosta. “In fact, Hispanic children are more likely to influence grocery purchase decisions across many categories compared to children in total U.S. shopper households, creating opportunities for brands and retailers to speak to both parents and their kids.”

“Hispanic consumers are key drivers in the CPG and grocery retail categories. When marketing to them, it is essential for brands to understand the role family plays in the grocery shopping experience,” said Liz Sanderson, Senior Vice President, Strategy and Insights, UCI. “Bringing a family member along, particularly children, is more than likely to influence Hispanic consumers’ purchasing decision, helping to introduce new products, which translates to an exploration of new items.”

The Why? Behind the Buy U.S. Hispanic Shopper Study, 6th Edition, highlights the variety of reasons these consumers are some of the most valuable grocery shoppers in the aisles:

Shopping with families in tow

Total U.S. grocery shoppers are more likely to shop alone, contrasted with Hispanic shoppers who often bring spouses, children, extended family or even friends with them to shop at the supermarket.

Hispanic shoppers indicated that planning meals, grocery shopping and preparing meals are all enjoyable. They are also willing to change up their routines and try new foods and dishes.

Just as Hispanic shoppers show an interest in exploring new foods to eat, they are also using digital and online tools to facilitate their shopping experiences before, during and after their trips to the grocery store.

The Why? Behind The Buy U.S. Hispanic Shopper Study, 6th Edition, was produced in partnership with UCI via Acosta’s proprietary Shopper F1rst™ survey. To access the full report, visit www.acosta.com/news. For more insights on Hispanic grocery shoppers, view the archived webinar.